Blog-a-Book-Scene is a monthly themed blogging endeavor from a group of authors who love to share excerpts from their stories. Find us on Twitter with the hashtags #blogabookscene and/or #PrairieRosePubs.


This Month's Theme
March's theme is Beware the ides of March. The tense battle in the excerpt below is from: 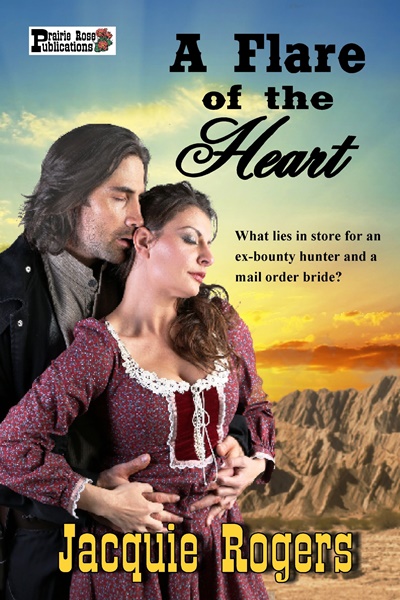 A Flare of the Heart
by Jacquie Rogers

This story is set near Silver City, Idaho, and is a novella associated with the Hearts of Owyhee series.  A Flare of the Heart was first published in the Prairie Rose Publications anthology Hearts and Spurs.

Blurb
Celia Valentine Yancey has no illusions she’ll ever enjoy wedded bliss, so chooses marriage over spinsterhood even if she has to marry a man her father picked. On the way to meet her groom, she endures armed robbery, a stagecoach wreck, a dozen hungry baby pigs—and an incorrigible farmer.

Ross Flaherty retired from bounty hunting to become a farmer but now Celia has brought his worst fear to his door—in more ways than one. A ferocious wolf-dog and a dozen piglets are no match for this determined lady.

Which is more dangerous—the Sully Gang or Miss Celia Yancey?


Excerpt
Bob Scully, bent on revenge, and his gang have Ross Flaherty's house under siege, but Flare and Celia aren't in the house--the local sheriff is.

“Come out of the house, Flare,” Bob Scully hollered.  “And fight like a man!”

The sheriff answered his request by firing twice.

Celia stayed close by Ross’s side, trying her best not to snap any twigs, sneeze, or do anything that might call attention to him.  She followed him down the creek, then up the hill to a pile of boulders about twenty feet behind the barn.

“He’s reloading,” Ross whispered.  “We’ll stay right here until he cuts loose with another round.”

“How do you know?” Celia asked.  She could see most of the Scully gang and part of the house.

“Sixth round.  Always keep count—then you know what you’re up against.”

“But you said to only load five,” she whispered.

“Load six when you need them.  Like right now.”

Celia loaded a sixth bullet.  “Where do you want me to go?”

“Stay right here.  When the sheriff fires another shot, or in two minutes, whichever comes first, start firing.  Count to twenty between each shot.  Aim low in front of the horses—kick up as much dirt as you can.”

“And where will you be?”

“I’ll be making my way around the pasture to the field next to the house.  There’s some alfalfa growing and it’s pretty tall.  I can belly-crawl through it without them noticing so long as you keep ’em busy.”

“Then you keep pulling the trigger until you’re down to the last five rounds and leave the rest to me.  If things don’t go my way, head back to the creek and follow it to town.”

He turned to leave, but she grasped his shoulder to give him a peck on the cheek for luck.  Instead, he faced her and she kissed him right square on the lips.  She was stunned.

He must have been stunned, too, because he stared at her for the longest moment.


“For luck,” she whispered.

* * *
A Flare of the Heart is available at Amazon Kindle.
Read for free if you're subscribed
to Kindle Unlimited.

Next month's theme will be April Showers.

If you're on Snapchat, friend me!  My handle is jacquierogers.  You can get videos of Sassy's latest updates there.  And goofy pictures of her scribe.

Keep up with Jacquie Rogers' latest news at the
Pickle Barrel Gazette! 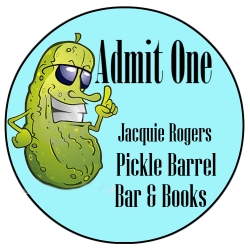